Numerous historical artifacts may rest in 28 feet of sediment at the bottom of a well near North Loudoun Street.

The Winchester-based French and Indian war Foundation (FIWF) – which owns the historic Fort Loudoun property at 419 N. Loudoun St. – contracted Subsurface Technologies of Rock Tavern, N.Y., to conduct a video survey of what lies beneath the water’s surface.

The survey took place Thursday at the site – a half-acre portion of land where George Washington designed and constructed a fort as commander of the Virginia Regiment in 1758. The approximately 6-foot-wide, 103-foot-deep well ahs had a concrete slab covering the top for about 80 years.

Stevan Resan, FIWF vice president and the project manager, said before the survey began that some of the information the group hoped to find included determining the depth of the well or the depth to any debris field, how the well was dug through the rock and seeing if there was any evidence of springs feeding it.

Historical correspondence between George Washington and an officer at the fort states that the well digger – or miner – had reached a depth of 100 feet but found no spring, Resan said.

The water’s surface is about 12 feet below the bottom of the cement slab.

Steven Catania, vide president for Subsurface, said his company generally surveys municipal and industrial wells and that the one he did Thursday was the first time the business has done a historical well.

To survey the well, Resan cored several parts of the concrete slab to allow Catania’s camera to be lowered into the well. As the camera descended, Resan, Catania and members of the FIWF watched a monitor in Catania’s trailer that showed a live feed of the device’s voyage.

The camera only made it to 75 feet before it hit a floor of sediment, leaving at least 28 feet of space between the new floor and the historically referenced 103-foot depth.

– similar to a drill – to make holes in the limestone, fill the holes with gunpowder and then detonate the explosive to go deeper into the earth, Resan said.

“[The survey] was very revealing and worthwhile and we will apply for grants to get any artifacts down there,” he said afterward.

“There’s a lot of sediment…that will have to be dug through and sifted through to recover, much as they do archaeology on the surface.”

If so, it would be the only Virginia site from the French and Indian War on the list, according to FIWF President Linda Ross.

Fort Loudoun was the 22nd site in Winchester to be aded to the Virginia register. 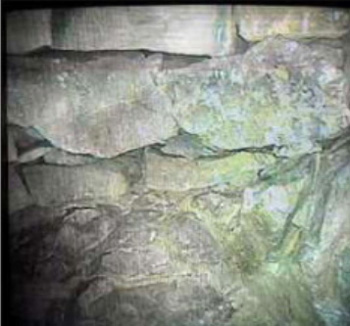 A video images shows the limestone walls of the 6-foot-wide, 103-foot-deep well being examined by Subsurface Technologies. 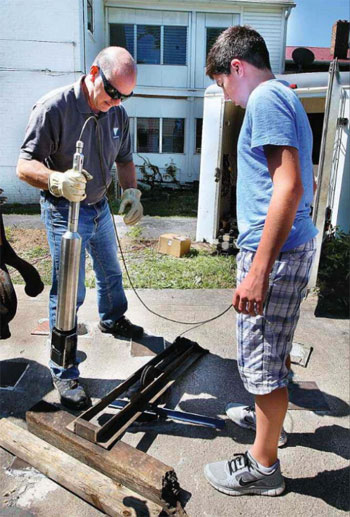 Steve Catania of Subsurface Technologies and his son, Chad Catania, lower a video camera into the well at the Fort Loudoun site Thursday afternoon. 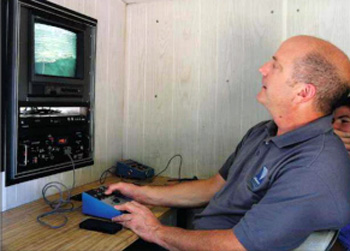 Steve Catania of Subsurface Technologies looks at an image of a wooden beam 48 feet down in the well at the Fort Loudoun site Thursday afternoon. The beam was under 36 feet of water.

How Can We Help?

Get Clean, Stay Clean, Be Green.